How Your Bridesmaid Dress Can Confuse Bride Kidnappers (and Other Tales)

Better warn your bridesmaids-to-be: The role of bridesmaids was originally to protect the bride from evil spirits and ghosts. Are they prepared for their duties?

As all brides know, wedding traditions are steeped in history. As you research these customs, you’ll find yourself wondering if they even apply to us now. And from the sensible, to the fashionable, to the wild, bridesmaids are not immune to folklore.

Luckily, now we can pick and choose what traditions we follow.

Where did the practice of bridesmaids originate?

There are varying theories. One dates back 2000 years ago, to biblical times. The bible mentions a story of when Jacob married two women, and each of his brides had a maid whose role was in dressing and preparing her mistress for the big day.

Another theory is that in ancient Rome, there was a requirement for at least ten witnesses at the wedding. These ten witnesses then became the bridal party.

Why do bridesmaids have matching dresses?

The idea was that bridesmaids had similar dresses to the bride and wore veils over their heads. This was so that when an evil spirit, ghost or kidnapper intent on revenge appeared to hurt or kidnap the bride, he was confronted with an array of identically dressed women. This, of course, would confuse the evil-doer and he’d either steal the wrong person, or leave, dejected.

The other theory was that the groom might be a little bit voracious, wanting to have his dessert before the dinner- the bridesmaids would defend the bride’s honour and keep her safe from him, at least until the wedding night. 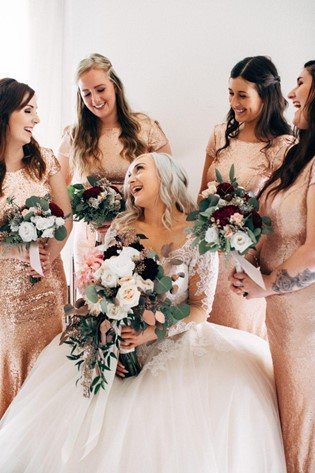 Sure, they laugh now, wait until they have to stop a kidnapper

When you think about it, it seems a little odd to be carrying a bunch of flowers to a wedding. Why not something useful, like a bunch of snacks? Because the bouquets had multiple purposes. Historically, they had herbs, grains and spices in them. Grain, to symbolise fertility, and strong smelling herbs to scare off pesky evil spirits.

If you wanted to take on some evil-fighting traditions in your modern bouquet, it’s actually easy- and pretty. Sage is a soft green colour and could be used to help cleanse areas of evil. Rosemary in a bouquet drives negativity away and adds texture and interest to a bouquet. You might include dill, as it’s an aphrodisiac, or drape some ivy through to help sense the presence of witches. 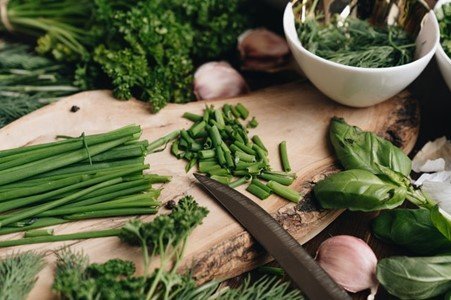 Maybe a bunch of garlic to keep the vampires away

As well as driving away evil spirits and confusing future husbands, bridesmaids have historically been the holder of the dowry purse. This was to stop it being stolen by bandits and thieves. Do your bridesmaids know ju-jitsu? Maybe consider adding a few classes to their pre-wedding duties.

When Queen Victoria married Prince Albert in 1840, she had a wedding party of 12 bridesmaids. She designed their dresses herself- all white, tulle skirts, and white rose details. It then became the fashionable thing to do by the rich and powerful. But all the bridesmaids had to be younger than the bride, and unmarried virgins, of course.

The 1900’s marked a change for bridesmaids

In the early 1900’s, customs started changing and bridesmaids were dressed differently to the bride. This was so that all of the focus was on the bride; one can only assume the evil spirits and ghosts had been banished by then. White started to fall out of favour, and more fashionable colour choices were made. This made bridesmaids less mini-brides, and instead, more like backup dancers.

Bridesmaids and the myth of the ugly dress

There’s a myth that brides have put their bridesmaids into purposefully ugly dresses to ensure that they will look more amazing, in comparison, on the day. Not one bride has ever admitted to this. It’s likely that making all your bridesmaids wear the same colour and same dress, and following fashionable trends, results in some less than flattering outfits (80’s puffed sleeves are a great example of this).

Modern bridesmaids have far less tradition to adhere to

The ‘rules’ have changed. You can have your attendants being male, female, or even canine. They can wear suits, jumpsuits, separates or even bikinis. Do what suits your wedding, what makes them (and you) happy. Don’t worry about having 12 bridesmaids, in identical white dresses, with veils, to confuse kidnappers. I think we can let that go. 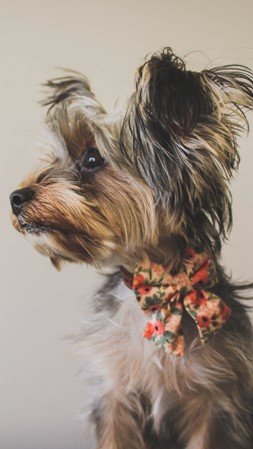 Photo by Iresha Ratnayake from Pexels

To make sure your bridesmaids look amazing, don’t feel like you have to put them all in the same dress. There can be variations on colour or dress style, depending on what your attendants suit. Give them an infinity dress, so they can style the dress the way they like but still look like a cohesive unit.

The other huge bridesmaid myth is that they will wear the dress again. With very few exceptions, they won’t, and it’s probably not even worth trying to pretend that will happen. I think we can safety consign that myth to the bin.

Newer Wrap Dresses; The Ultimate in Style and Sophistication
Back to list
Older How to Plan a Multicultural Wedding That is Uniquely Yours